Find the podcast at

Lyft and Uber are two of the most well-known, on-demand ride-service providers in the current landscape of shared mobility. As monthly ridership for these two services grow, researchers are left wondering about the individuals giving the rides: the drivers. This paper shifts the focus from on-demand, ride-sharing passengers to the drivers – a topic to which little attention has been paid. In August 2015, Kelley Blue Book provided a dataset from its nationwide survey of U.S. residents aged 18 to 64 that collected information on shared mobility awareness and usage, personal vehicle ownership, aspirations for future vehicle ownership, and attitudes and opinions on shared mobility and personal vehicle ownership. We estimate an ordinal logit to understand the willingness to be a driver for an on-demand ride sharing service. We find that the individuals who report higher VMT and that have more children are more willing to drive for the service. Older women with higher incomes are among the least likely to desire driving for these services. We introduce attitudinal factors and find that those who believe “Ride-sharing is better than vehicle ownership” are more willing to drive for these services. Furthermore, vehicle ownership is positively correlated with the desire to drive for on-demand ride services – owning a vehicle makes it possible for an individual to drive. The next step of this research is to develop a new survey that over samples ride-sharing drivers to better understand who is driving for these services, rather than who is willing to drive for them

Like its predecessors, the criteria for this report are biofuels assessed by the California Air Resources Board with a carbon intensity rating at least 50% below that of petroleum-based reference fuels, and producers in the United States and Canada. Virgin oil biodiesel falls within the study criteria and is included in the report due to a carbon intensity rating revision due to changed modeling; it was out of scope in the earlier modeling and excluded from the E2 reports. The focus is liquid biofuels, including dimethyl ether (DME), a liquid at moderate pressure, and excludes biogas.

The report provides information on market plans for near-term production capacity through 2018. It is neither a prediction nor a forecast of either capacity or actual production levels. Rather, it is one indication of potential North American production of fuel volume that meets the California carbon intensity rating cut-off in the next couple of years, given favorable market conditions and the current policy environment. For commercially emerging technologies and fuels, production capacity ranges are assessed based on company and media reports, and are filtered through a subjective evaluation of the likelihood of announced capacity coming online in the 2018 timeframe. The low end of the production capacity range reflects capacity in which we have higher confidence: existing capacity plus companies that have shown signs of plans to move forward on the ground. The high end of the production capacity range includes capacity from companies that is assessed as less likely: from companies that still face some significant hurdle (e.g., financing) to meet targets or have not pinned down target dates due to unfavorable market conditions. Well-established technologies and fuels like biodiesel are treated separately. In the case of biodiesel, production is determined by policy more than it is constrained by capacity. Therefore, the focus of this report is on describing the policies and other industry trends. The report includes information on private and public financing levels for biofuels, drawing, like the E2 series, on Clean Tech Group’s industry financial data plus government data, through 2015. 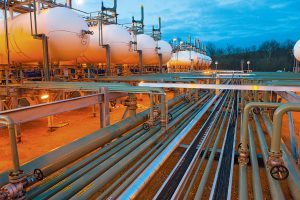 Natural gas has been proposed as a possible “bridge” fuel to eventual use of hydrogen in zero emission fuel cell vehicles. This literature review explores whether the natural gas system might help enable a transition to longer-term use of hydrogen in transportation. Two transition strategies are reviewed: adapting natural gas refueling infrastructure for future use with H2 and blending renewable hydrogen into the NG system.

Our review suggests it is not attractive to re-purpose or overbuild NG fueling station equipment for future hydrogen service. Transporting H2/NG blends in the NG pipeline grid appears technically possible at modest fractions of 5–15% hydrogen by volume, but requires careful case by case assessment and could be expensive. Blending does not enable major reductions in GHG emissions from transport, unless “green” hydrogen can be cost effectively separated from the blend and delivered to highly efficient fuel cell vehicles. Ultimately, blend limits could make it difficult to utilize the existing NG system to deliver hydrogen at the scale needed to achieve deep cuts in transportation related GHGs. A dedicated renewable hydrogen system would be needed, if zero emission fuel cell vehicles play a major role in a future low carbon world.