The Paris Climate Accord reached on Saturday, December 12, feels like a home run. Nearly 200 countries fully agreed on text in which they pledge to make large reductions in greenhouse gas emissions over the next 15 years, with mechanisms to help ensure that this goal is achieved. It includes quantified CO2 mitigation commitments from all major economies around the world; mechanisms for reporting and verifying progress; commitments for $100 billion in financing of actions; and many other key elements.

However, as President Obama said in his speech that day, this agreement does not “solve” the global climate change problem.

“Even if all the initial targets set in Paris are met, we’ll only be part of the way there when it comes to reducing carbon from the atmosphere, so we cannot be complacent.”

The president is correct: This is only a partial solution that does not (yet) limit temperature change to 2 degrees Celsius, and it needs to be fully implemented over the coming years, with all the uncertainties around that. But it does contain many promising elements. For example, it includes specific pledges from most of the signatories to cut CO2 emissions by 2030. These commitments vary widely, as do each country’s circumstances.

What’s the outlook for transportation? Last week I noted some of the measures that feature in the Intended Nationally Determined Contributions (INDCs) of a range of countries. Today I’ll show a comparison of actual targets under the accord, with one possible scenario for transport. This is highly speculative since few countries have indicated the sectoral breakdowns of their targets; for example, even countries shooting for 40% reductions in CO2 emissions have not indicated if that means 40% in each sector (transport, buildings, industry, electricity generation, etc.) or 40% on average with individual sectors varying. But if you take for a moment the possibility that transportation delivers reductions at an average intensity, you can gain a sense of the challenge ahead.

The first figure below shows the 2014 estimated energy-related CO2 emissions for six major economies, and the 2030 target (taken as the midpoint in cases where a range of targets is possible, based on analysis presented here). The second figure shows hypothetical targets if transportation CO2 were reduced in the same proportion as the overall targets for each country, starting from 2014 transportation CO2 emissions as estimated by the International Energy Agency.

As you can see in the first figure, the U.S. commitment is ambitious – a major reduction from nearly 20 tons per capita to less than 13 by 2030. As shown in the second figure, if the U.S. reduced transportation-related CO2 emissions in proportion to this total, it would be a cut from about 6.5 tons per capita to about 4.5 by 2030.

This would still leave the U.S. at a higher per-capita emissions level than any of the other countries or regions shown. But it certainly would put the U.S. on a strong downward trajectory. China and India would actually increase their per-capita transportation emissions, but not by as much as would have occurred without their commitments – and both would remain at a very low CO2 level in 2030. Russia would retain a more average position; though Russia is noticeable in its overall target (Figure 1) in that it starts with fairly high emissions and these increase significantly – it would become the highest per capita of the six countries by 2030. 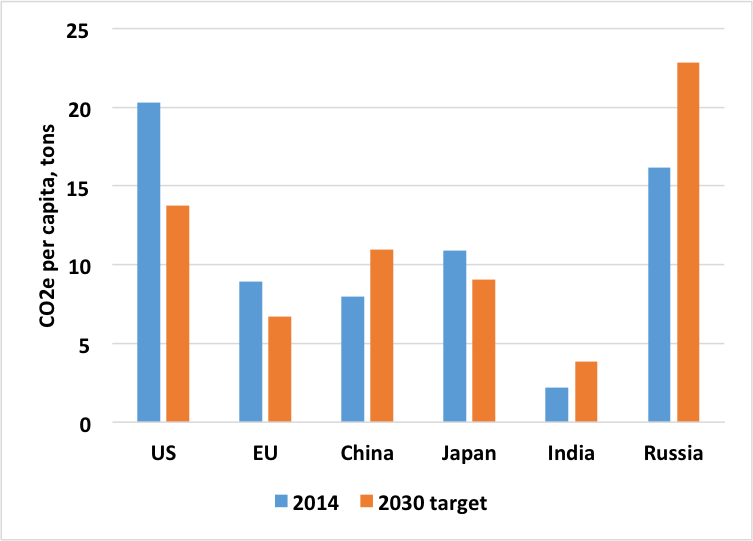 Figure 1. All energy-related CO2 emissions per capita for selected countries, for 2014 and explicit or implied targets for 2030 (based on analysis conducted by climateactiontracker.org, using national INDC reports; for 2030 approximate midpoints are used where a range of targets or uncertainty in targets may exist; these are meant to be indicative and are not official numbers). 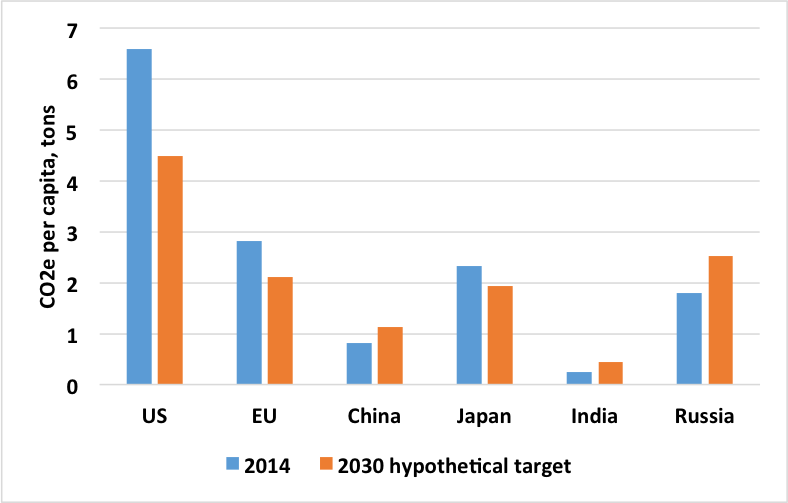 Figure 2. Transportation-related CO2 emissions per capita for selected countries, for 2014 and hypothetical targets for 2030 (based on the analysis conducted by climateactiontracker.org, and adjusting the national commitments in Figure 1 for transportation, assuming transportation reductions are taken in the same proportion. Transportation CO2 estimates for 2014 are taken from the IEA Mobility Model).

Whether or not countries decide to tackle transportation at the same level of intensity as other sectors, they will need to include ambitious goals for transportation to succeed. How will they achieve targets like these and move from planning to doing?

“You have to do many different things and each place it’s different,” noted California Governor Jerry Brown in Paris.

Among the combinations of measures that make sense for most countries to include: promote much better fuel economy of new cars and trucks (and also of second-hand imports, for those countries that import many such vehicles); shifts of travel from high CO2 modes (like cars and trucks) to lower CO2 modes (mass transit, cycling and walking, along with more rail freight). Alternative fuels will also need to play an expanding role. The only three potentially very low-emission fuels are electricity, hydrogen and biofuels, and these will need to lead the way to very low CO2 emissions. International aviation and shipping are particular challenges, since they are not covered under individual country commitments. The international bodies International Civil Aviation Organization (ICAO) and International Maritime Organization (IMO) have been asked to redouble their efforts to work with industry on commitments and strategies for these sectors, and they too will need to put a large emphasis on efficiency and alternative fuels.

The best combination of measures will vary by country, as will the role of transportation in achieving overall CO2 targets. During 2016, the STEPS program at UC Davis will be looking more closely at the plans of different countries and assessing combinations of transportation measures that can help get the job done.

All told, the U.N. Framework Convention on Climate Change Conference of the Parties (COP21) in Paris was the subject of exhaustive negotiations (and a 31-page agreement); extensive coverage in traditional media; and enormous attention on social media.

What’s yet to be written is whether the conference ultimately achieves its lofty goal: ensuring a “shared future and shared environment” for our planet.