I spent only two days in Marrakech for the 22nd annual United Nations Climate Change Conference – “COP22.” But it was enough to see that a) the commitment of countries and participants is still very high despite the results of the U.S. election, and b) the excitement of the Paris Agreement last year has given way to work “in the trenches” – the slow process of developing national CO2 targets and strategies to meet those targets, as per the commitments made under the agreement.

Thus a key theme of COP22 was debating how best to create a fair “rulebook” that all countries could share and have confidence in when assessing each other’s climate pledges. The technicalities of the rulebook—baselines, methodologies, etc.—will likely be a continuing discussion into 2018. This timeline means that few of the loose ends left by the Paris Agreement were completely tied up in Marrakech. But it was clear in the transportation meetings I attended that countries are now finally grappling with details:

• How do their overall “Nationally Determined Contribution” (NDC) targets compare to other countries’?
• How can they achieve these targets?
• Where does transportation fit in this big picture?
• What policies should they consider adopting for transportation and what types of impacts will specific policies have?

In fact, as detailed in a very useful 2016 report by the Partnership on Sustainable Low-carbon Transport (SLoCaT), while 75% of the 138 existing NDCs developed before the COP specifically mention transport as an important sector for reductions, only 63% include any specific transportation mitigation measures, and only 9% have developed a transportation-specific target for CO2 reductions. A major point of discussion on November 13th the “Transport Day” workshop in Marrakech was this: What levels and types of targets should countries be considering for their transportation sectors?

In considering this, the following figure is instructive. Based in part on International Energy Agency (IEA) scenarios and in part on countries’ own plans to date, it shows the stark difference between a “business-as-usual” (BAU) scenario and “low-carbon scenarios” for transportation worldwide. The low-carbon scenario is based on reviewing a wide range of studies on what appears feasible given a fairly strong mix of measures; this is roughly aligned with a transportation trajectory consistent with the IEA 2 degree scenario, where 2050 emissions are about 20% below 2010 levels.

However there was much discussion at this COP about achieving a 1.5-degree target, given the strong call for this in the Paris Agreement. This is (perhaps surprisingly) estimated to be much more challenging than achieving 2 degrees since a) the full economy-wide carbon budget must be much lower and- related CO2 emissions should actually hit net zero before 2050, and b) since transport does not decarbonize that deeply under a 2 –degree target it is left with a large additional “workload” under a 1.5-degree target, to achieve near zero emissions by 2050. (It does not quite reach zero on the assumption that other sectors, notably electricity generation, manage to go below zero such as through a combination of bioenergy and carbon capture and storage strategies.) 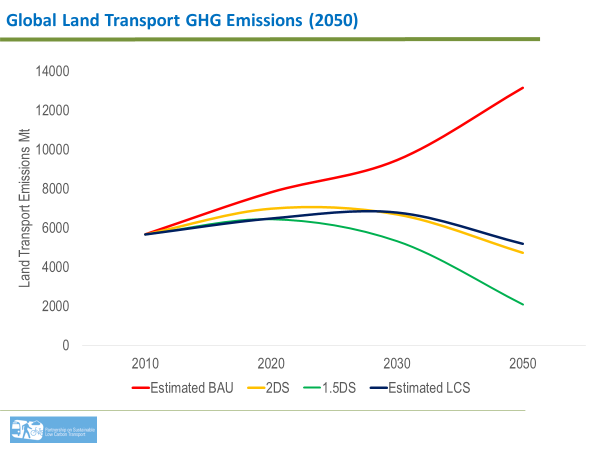 To achieve such a 1.5 degree target, countries will literally have to “throw the kitchen sink” at the problem, with strong national and sub-national commitments in all aspects of transportation including “avoid”, “shift” and “improve” options. Very strong land use planning efforts, major investments in public transit systems, walking and cycling infrastructure, strong pricing mechanisms, and a major push toward greener vehicles (via fuel economy improvements and a transition to very low-carbon energy systems) were all discussed as needing to be part of the answer. Previous debates about “technology vs. behavior” have given way to “we have to do it all” discussions. For urban transportation, the idea of a 50-50 strategy between “avoid/shift” and “improve” strategies seemed to take hold. Air and shipping were also discussed and there was a consensus that these modes may be even more difficult to decarbonize than land transportation, given the limited options and lack of electrification potential.

Meanwhile, a separate meeting of transportation modelers, ITEM-2 (the “International Transportation Energy Modeling” group, founded by Sonia Yeh and myself) was held two weeks prior to the COP in Chalmers, Sweden. This meeting included 12 major models and modeling groups, and undertook a range of comparisons of BAU and low-carbon scenarios. Basically none of the models has developed a transportation pathway approaching the 1.5-degree scenario in the above figure, and even 2-degree transportation scenarios are clearly a challenge for these models. A compilation of scenarios from the meeting is shown the figure below. 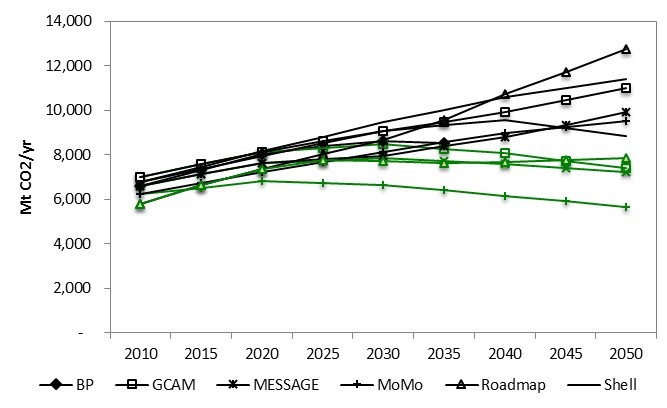 But at that meeting there was an agreement to continue to develop stronger, more ambitious scenarios, and this was reiterated when the results of this workshop were presented during Transport Day at the COP. It was generally agreed that this modeling group, that includes universities such as UC Davis, international organizations such as IEA, ITF and IIASA, and energy companies such as Shell and BP, can serve as an important “sounding board” for the COP system and individual countries going forward as they develop their own strategies and attempt to estimate the potential CO2 reductions that they can achieve.

In the end, this COP, at least for transportation, has launched a new era of practicalities – developing detailed plans and strategies, along with quantitative assessment tools to score these as well as track progress.

The STEPS program at ITS-Davis will stay closely involved as this process moves forward, offering to provide important analysis that can help underpin the global approach underway to decarbonizing transportation.